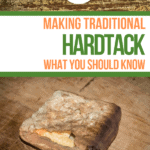 Are you looking for an easy, indoor homesteading activity to try with your kids this summer? Why not make some traditional hardtack.

For centuries, hardtack has been a staple survival food for pioneer homesteaders, soldiers, explorers, sailors, and many others. In fact, historical records show variations of hardtack being used in ancient times by the Egyptians and Romans.

Also known as sea biscuits, sea bread, dog biscuits, and a host of other names, hardtack is a dense, brick-like mixture of flour, water, and salt.  There are many additives and other ingredients you can add to hardtack, but making traditional hardtack is a good place to start.

The term hardtack itself comes from the British slang “tack” for food. Literally meaning “hard food”, the name perfectly warns a person what to prepare for before eating it. In fact, the unleavened biscuits become so dense and hard that you have to soak them for several minutes before you can safely chew them.

In the 15th and 16th centuries, the British Royal Navy began mass-producing hardtack to supply its sailors with their daily ration of a pound of hardtack. The inexpensive ingredients needed to make hardtack made it a perfect way to feed armies and fleets around the globe.

Nearly every port in the world had savvy businessmen making hardtack near the docks to resupply ships.

In the 19th century, hardtack was a main source of food for gold prospectors in the California Gold Rush, as well as the Union and Confederate soldiers in the American Civil War. Soldiers on both sides hated the biscuits and would find many creative ways to improve the flavor and edibility to be used for breakfast, lunch, dinner, and dessert.

In the same way that Canadian pioneers, the Metis people, and voyageurs packed smoked game meat or pemmican, the lightweight hardtack was perfect travel food.

Although hardtack became less popular after the invention of refrigeration and canning, it's still used today as part of some country’s military rations around the world. Many people also like to include it in their homemade wilderness survival kits.

Wondering how to make hardtack? You almost certainly have the necessary ingredients to make a traditional hardtack recipe: four to five cups of flour, one cup of water, and two teaspoons of salt. Once you’ve gathered your ingredients together, follow these simple steps.

How to Make Hardtack

As an Amazon Associate and member of other affiliate programs, I earn from qualifying purchases.

Primal Survival How to Make Hardtack the Traditional and Modern Way

In some modern-day recipes, people add butter, sugar, honey, or spices to improve the taste. For a touch of sweetness, try adding 1 tbsp of honey while mixing the dough. If you want to add some spices, try adding some oregano, rosemary, or cayenne pepper.

While extra flavor helps make these biscuits more edible, additional ingredients do have a major drawback: it will drastically reduce the biscuits shelf-life. Hardtack has become so coveted as a survival food because it lasts for decades without spoiling. The simplicity of the recipe and its stable ingredients ensure this.

So before you get all excited to start adding extra ingredients, make sure you have a plan to keep the biscuits from going bad.

If you make traditional hardtack without any additives, it can last decades without going bad. It must be stored in a cool and dark space, ideally in an airtight container or vacuum seal. Moisture is the nemesis of storing any dried preservative, so make sure it stays bone dry.

Furthermore, the airtight container will help keep out any larvae or pests. You don't want to spend all this time making hardtack to help secure your food supply, only to find it destroyed by rodents or insects. Storing your biscuits properly will ensure that if you ever do need them, they'll still be edible (and there).

Weevils in the wheat grain have been associated with ruining batches of hardtack, so make sure you check your flour before beginning. In the past, sailors and soldiers would submerge their hardtack in water or coffee, and see if any larvae floated to the top. If so, they would simply skim it off the top and continue eating. You should definitely double check your flour.

There are a few different ways to eat hardtack. Don’t just bite into it, there’s a reason one of its nicknames is “molar breakers”. A popular way to soften the hardtack is by submerging it in a glass of milk, coffee, or water for about 15 minutes, and then fried in butter. You can also mash it up and mix with water to create a hardtack meal, kind of like a disappointing porridge.

Interestingly, the desperation of Civil War soldiers during the conflict led to some new and creative ways to make hardtack just a little more palatable. They would use the stock of their rifles to crush the bread, which they would then mix with water and form into a pancake. This would be either fried in a pan or cooked directly on coals of a fire.

For dessert, soldiers would add hot water, brown sugar, and whiskey to the crushed hardtack to create a simple pudding.

Alternatively, hardtack can be soaked in a hearty venison stew or white bean kale soup.

Hardtack As a Survival Food

No matter your reason for making hardtack, it’s one of the ultimate survival foods next to pemmican. In fact, Pemmican and hardtack pair really well together.

The dense caloric content and long shelf-life of hardtack mean you can prepare a large amount and store it for years as an emergency food supply. Plus, as sailors and soldiers have proven, a little creativity can make hardtack useful for every meal in a survival situation.

If hardtack isn't already in your bugout bag or cellar, get started making your own supply today and let us know what creative preparations you come up with!

This post is part of the Homestead in Your Homeschool Series which is included in the Homeschooling Fun Through the Summer series 2021.