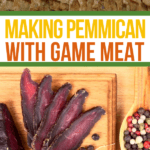 Whether you’re prepping your bug out bag with non-perishable snacks, or just finding an easy way to preserve your game meat, making pemmican is a great way to use any extra game meat. Pemmican is a densely packed mixture of fat and protein with an incredibly long shelf-life. Making Pemmican with game meat is a simple and fun family activity.

Learn about the history of pemmican and why it's regaining popularity throughout North America and Europe.

Pemmican is a meat and fat mixture usually made from elk, bison, caribou, deer, or moose. Similar to jerky, the meat used to make pemmican must be dried with the fat removed. However, remember to keep the fat. You'll add it back into the meat mixture at a later stage in making pemmican.

Depending on your preferences, try adding dried berries or unsalted nuts to your pemmican recipe. And check out the site Alderleaf Wilderness College for some great pemmican recipes for inspiration. However, take note. Adding extra ingredients to the meat and fat will reduce pemmican's shelf life.

Wild game meat isn't the only wild food to dry and keep in your survival stash or prepper pantry. Learn how to make smoked fish or dried fish at home and preserve your catch for the future. Or learn how to can fresh fish to add some variety to your off-grid food supply.

Where Pemmican Comes From

The word "Pemmican" comes from the Cree word "pimikan." And according to the Encyclopedia Britannica, the Cree word means "manufactured grease."

Traditionally made from dried buffalo meat that was then pounded into powder, pemmican has been a staple food for many indigenous tribes over centuries. The high-energy food was adopted by the European fur traders and explorers as they spread across North America.

Facing harsh winters and unforgiving land, pemmican was a lifesaving resource for these men and was credited with preventing their starvation.

Because of its density and long shelf-life, pemmican, like hardtack, (aka survival bread), was easy to transport in canoes or in a pack over huge distances. As a result, it was used for hundreds of years to supply crews on long journeys across the globe. This included expeditions to the North Pole and through the heart of Africa.

What Was the Pemmican War?

Pemmican was critical to the survival of North America's early explorers and traders. In fact, it was so important that there was an entire war fought over it. The Pemmican War (1812 - 1821) was a series of skirmishes and battles between the Hudson's Bay Company and the North West Company.

The main issue was regarding pemmican exports and trade, coming to a head at the Battle of Seven Oaks, and also at the burning of Fort Douglas and Fort Gibraltar. By 1821, the two rival companies merged, swiftly ending the almost decade long confrontation.

Why is Pemmican Still Popular?

With refrigeration and a variety of other preservation methods available today, you might wonder: do people still make Pemmican? Yes! In fact, it's experiencing a resurgence in popularity as preppers and homesteaders embrace the traditional way of living.

The simple truth is that more and more people have become concerned about their family's food supply. They're pursuing survival and homesteading skills.  They're raising rabbits for meat, keeping chickens, and growing gardens to feed a family They're foraging and preserving food through pickling, smoking meats, or fermenting foods. And they're considering the shelf-life of the food items used to stock their pantry.

Why Pemmican Appeals to Preppers

Making pemmican with game meat gives you a reason to use up those less desirable cuts of meat that might otherwise go to waste. And it only takes minimal preparation. So pemmican can be made in the woods over a simple fire.

Plus, its shelf-life can be anywhere from a few years to a few decades. That's why pemmican has become increasingly popular among preppers as the ultimate survival food.

Related: How to Store Your Harvest Without a Root Cellar

How to Make Pemmican With Game Meat

Squares are better for storage and maximize space more efficiently if you’re going to be carrying it in a pack. As with any preserved food, make sure you store it in an airtight vessel in a cool, dark place.

It’s no wonder pemmican is still regarded as the ultimate survival food. Making pemmican with game meat was how indigenous tribes and explorers traveled long distances. They moved across the continent without running out of food.

Preparing and storing pemmican is easy.  Plus it's a very useful skill to learn. After hunting season this fall, try making some with the family and store it in your cellar for years to come.

This post is part of The Homestead Blog Hop 324!