Moose encounters are more likely than you might think and can be extremely dangerous for people. In fact, in Alaska, moose pose more of a threat to humans than bears do. Part of the reason is that moose tend to be less afraid of people than most other large animals in North America.

Whether you’re charged by a moose, trampled, or hit one with your vehicle, moose can pose a significant risk to your safety. Are moose dangerous? Let me tell you a bit about my own near-death experience with one. 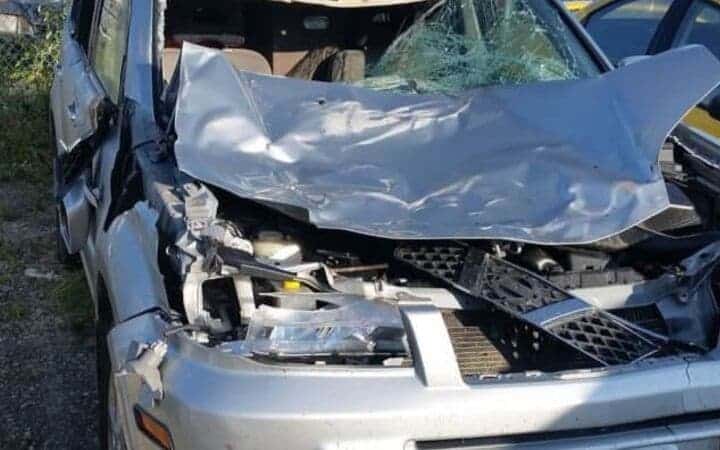 In September of 2016, I was driving late at night on the Trans-Canada Highway in Northern Ontario (Canada). I was about halfway between the towns of Sault Ste. Marie and Wawa. I knew I was in prime moose country. But I continued on my drive anyways to try and make it home before morning. This stretch of highway has hundreds of moose-vehicle accidents every year. And unfortunately, some of them result in fatalities.

I came around a corner full speed (about 60 MPH), saw a flash of antlers and before I knew it, a full-grown bull moose was smashing through my windshield. It was that quick, zero time to react. The moose was running across the road, right in front of my SUV. The impact totalled my vehicle and was so hard it ejected my suitcases out of the back windows.

I had deep lacerations on my right arm from the windshield, and my stepdad (riding shotgun) had a face and eyes full of glass and moose hair. The moose died instantly, but I was incredibly lucky to be alive. An hour or so later the paramedics arrived --I was in a pretty remote area. They were shocked we were both alive, let alone conscious.

What Makes Moose-Vehicle Accidents so Deadly?

One of the main reasons moose-vehicle accidents can end in human fatalities is due to the height and size of moose, as well as antlers on the bulls. Moose have very long legs, so when you hit one with a vehicle it takes their legs out and the entire body of the animal hits your windshield at full speed.

And if you're wondering just how big moose can get, a male moose can be as tall as 6.9 feet - and that's at the shoulder!!  And they can weigh up to 1500 lbs. While we're on the subject of fun moose facts, the plural of moose is moose. Not meese. Not mooses. Just plain old moose.

Airbags on vehicles are triggered by an impact and sudden change in speed. But since taking out the moose’s legs doesn’t create enough of an impact at first, most airbag sensors don’t register the impact, and as a result, don’t deploy. Mine didn’t. And my stepdad and I were incredibly lucky to walk away from this accident.

Once it was established that we were going to be okay, a few locals set about quickly quartering and harvesting the undamaged parts of the moose so nothing would go to waste.  Unfortunately, I didn’t think to keep the antlers, but I hope I don’t have another chance to!

What I Did Wrong

Even though I was following the speed limit, you should always travel at a slower speed when you know you’re in moose country. Definitely slow down when you’re driving through moose country on a windy road and can’t see around the next bend. Travelling through moose country at night should be avoided at all costs since it is extremely difficult to see the tall dark animals in the dark. In hindsight, I should have stopped at a motel until morning.

If you live in a popular moose area, don’t drive a small car. A large SUV or pick-up truck sits higher and give you a better chance to survive a moose collision. Especially if you have a “bull bar” on your vehicle. Install a bull bar (affiliate link) on the front of your vehicle to protect it from collisions and help deflect animals from coming through your windshield. And if you're ordering your bull bar online, make sure you get the right-sized one for your vehicle.

If you do have to drive at night in moose country, always have your high beams on.  High beams project light at a higher angle than regular headlights and give you a better chance to see the tall animals in the distance.

Other Ways Moose Can be Dangerous

As their natural habitat diminishes, moose and human encounters have become more common. Moose encounters can be dangerous any time of the year, but especially in the spring and fall. In the spring, cow moose may have calves with them. They can view humans as a danger to their young ones. During mating season in the fall, bull moose are competitive, agitated and generally aggressive.

Do NOT approach, feed or pet moose at any time of the year. It is illegal for a reason. Moose can be aggressive and unpredictable. They are known to charge people if they feel threatened and will ram you with their heads and antlers, knock you down and trample you. And FYI, the Alaska Department of Fish and Game have some great online tips on how to handle aggressive moose behaviour.

When walking your dogs in moose habitat, keep them on a leash and close to you. Moose can mistake dogs for natural predators like wolves, and will immediately become defensive and aggressive.

Also, if you see a young moose, you can bet their mom is nearby and will not be happy to see you. If you find yourself in this situation, slowly back away and find a safe area to wait until the moose move on.

By now, you should know the answer to “are moose dangerous?” Yes, extremely. Before my up close and personal encounter, I didn’t fully appreciate the size and dangers posed by these giants. Ever since my accident, I have followed all moose safety practices and haven’t had an issue. If you encounter moose in the wild, do not approach or feed them. Just appreciate their beauty from a safe distance! 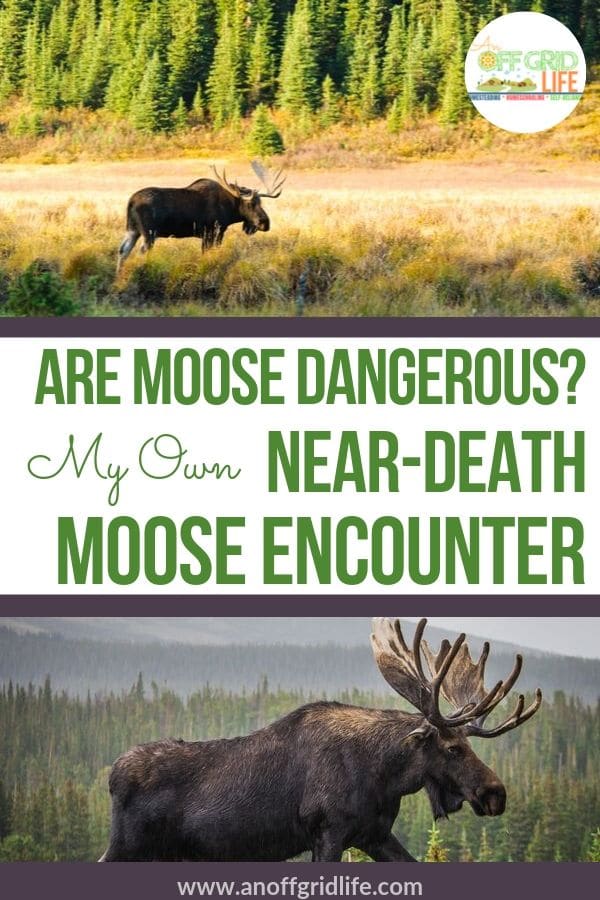