Home » Our Life Off Grid

So a few weeks ago we returned to the off grid home we left three years ago. It broke my heart when we had to leave; but my husband was offered a great job in a different part of Canada. So we packed our bags, winterized the house, put up a for-sale sign, and hit the road.

But guess what? Our house didn't sell, and we were secretly relieved. (Well, I was, anyways). So when we had the opportunity to return this summer we jumped at it. But we were anxious. 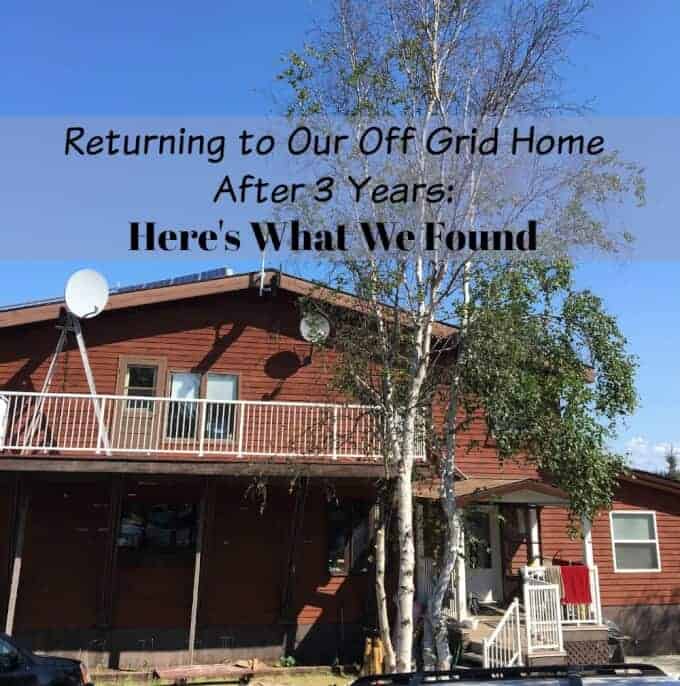 PinWhen you leave an off grid home alone for any length of time, you don't know how it will stand up to weather changes, animal encounters, human trespassers, and Mother Nature. In an extremely cold climate like the one we live in, you risk finding all sorts of problems when you return. And some of them, like burst pipes, damaged batteries and broken down boilers, are expensive fixes.

Now we're back, and this is what we've found (so far).

There must have been one heck of a wind storm or heavy snow and ice while we were away because we found several of our birch trees snapped off about six feet up, while one birch stand just toppled right over! Our off grid home is on a one-acre lot which is mostly bedrock sloping down to a lake behind us. Between the bedrock and the fact that we're so far north, the trees have shallow roots. So with enough wind they just fall right over.

Three years ago when Dan was getting ready to drive down south, it took him three attempts to leave the area. That's because there were some major forest fires happening and the highway south of Yellowknife was closed. In their wake, the fires around here provide a good environment for fireweed to grow. This beautiful perennial wildflower has been used by the indigenous people in the north for hundreds (thousands?) of years. It's used as a vegetable green, for tea to soothe indigestion, and as an ingredient in anti-inflammatory salves to soothe swelling and bruises. 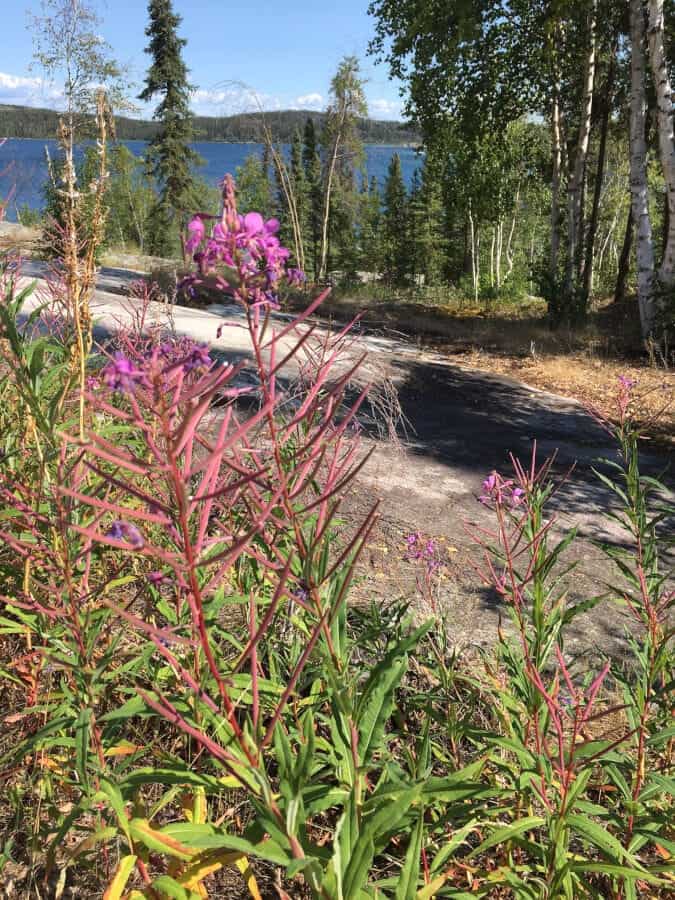 Fireweed in our yard in NWT

There was also three years worth of weeds - a haven for mosquitoes and horse flies. The bugs were driving Dan nuts so he mowed those weeds down before I could get a good picture!

So once upon a time there was a lovely raised vegetable garden on our property. It was full of (trucked-in) nutrient- rich soil. It was full of carrots, peas, radishes, lettuces and onions. That was long before my time though - I'm a terrible gardener. Now all that's left is some rhubarb that's gone to seed.

It may be a little late this year, but I have big plans (to teach my daughters) to garden and fill it up next summer. 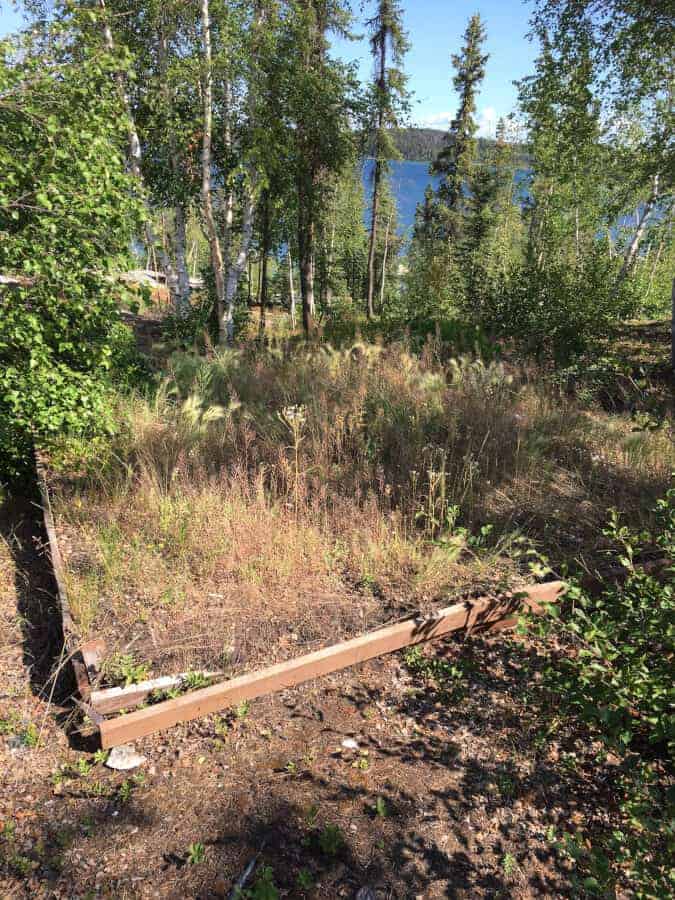 Our vegetable garden is now mostly weeds, with some rhubarb that has gone to seed.

Peeling Paint in Our Off Grid Home

Our kitchen and entrance was painted less than a year before we left. Yet we returned to peeling paint on the ceiling and upper parts of the kitchen cabinets. Nothing too majorly expensive. We think it's from the extreme temperature changes and the fact that the house was closed up all through the hot summers. 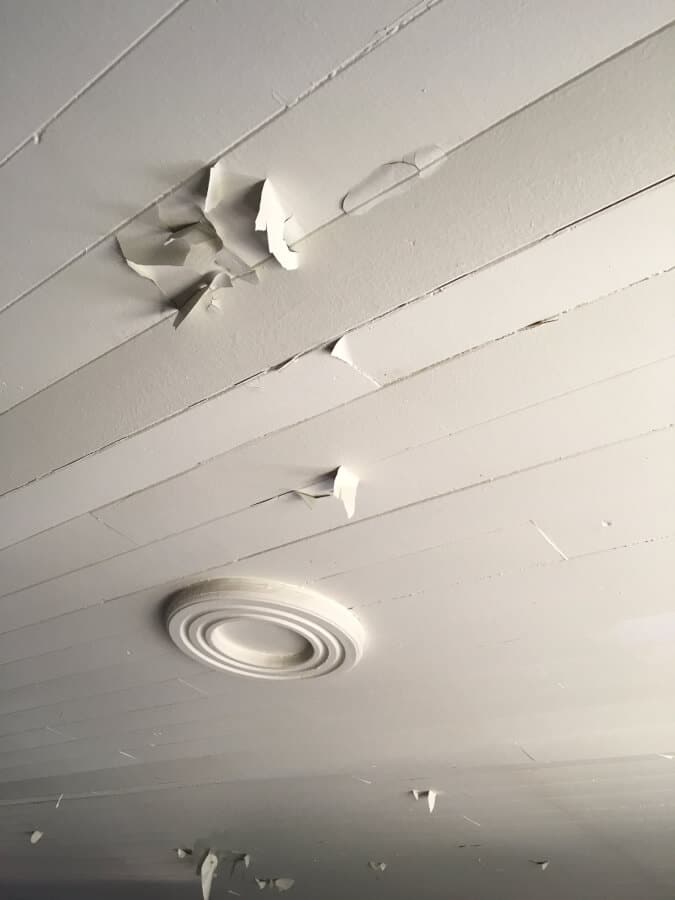 We found peeling paint on the ceiling and upper walls of the main level of our home.

We literally held our breaths when it came time to turn on the water pump. As I explained in a recent post, our off grid water system has a number of important parts. They're needed to get water from the lake behind us up over the bedrock our home is built on and into our 1500 gallon water tank. And after sitting unused through two cold Canadian winters, we weren't so sure it would hold up. Dan flicked the switch, we prayed, and within minutes we could hear the water gushing into the tank.

Next came the real test. Dan opened the water to the bathrooms and the kitchen, and we searched for sounds and signs of burst pipes behind walls. Other than leaky seals on the plumbing pipe below the kitchen sink and one of the bathroom sinks, all was well. We ran water through all the taps and Dan drained the washing machine to remove all the glycol antifreeze he had filled them with before we left in 2014.

Our off grid home isn't as self sufficient as I'd like. Yes, we're off the power and water grids, but we do depend on propane. We use it to run our stove, and our dryer in winter (though I prefer to line dry as much as possible). We also use it for the glycol tank that heats our water line after the lake freezes. And for our in-floor heating. We have a huge propane tank that's filled as required by the propane company in town.

Again, our off grid home sat empty for three years with all systems unused. So we weren't sure if all of our systems - including our propane -  would fire up fine. They all did.

Solar Panels Soaking Up The Sun

Summer is a great time for powering our off grid home in the north because we get up to 20 hours of daylight. We have eight 80 watt solar panels on our roof (we have a two story chalet style home). And even though we'd been away for so long, our batteries were charging off the trickle that came in from our solar panels soaking up the northern Canadian sun. So all of our interior lights worked right off the bat.

Lucky for us, one of the homeowners who lives further along the lake also owns a solar company. He stopped by to show us how to restabilize the batteries that get powered by the solar panels. We have 12 deep cycle batteries and a Xantrex 4024 pure sinewave charger inverter. 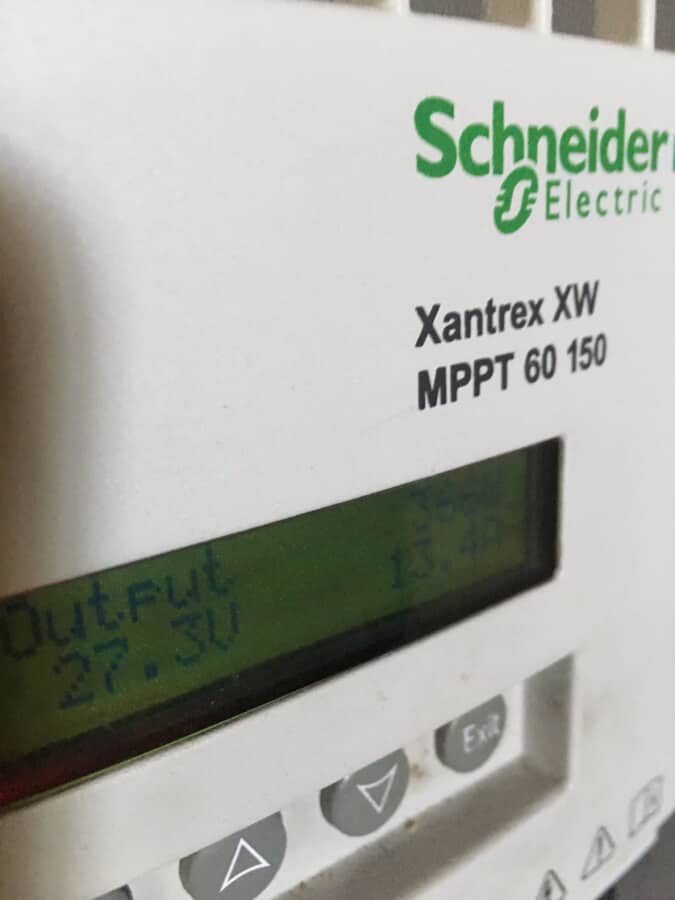 A Whole Lot of Raspberries!

A couple of weeks after returning home one of the kids noticed a ton of raspberries growing right behind our water tank room. It took about twenty minutes to get four cups of these delicious berries. While wild raspberries grow in patches over the rocks on our property, these look like ever-bearing raspberries that must have been planted by a previous owner as they're bigger than the wild berries we pick. We're making them into jam this week as a summer homeschooling activity. 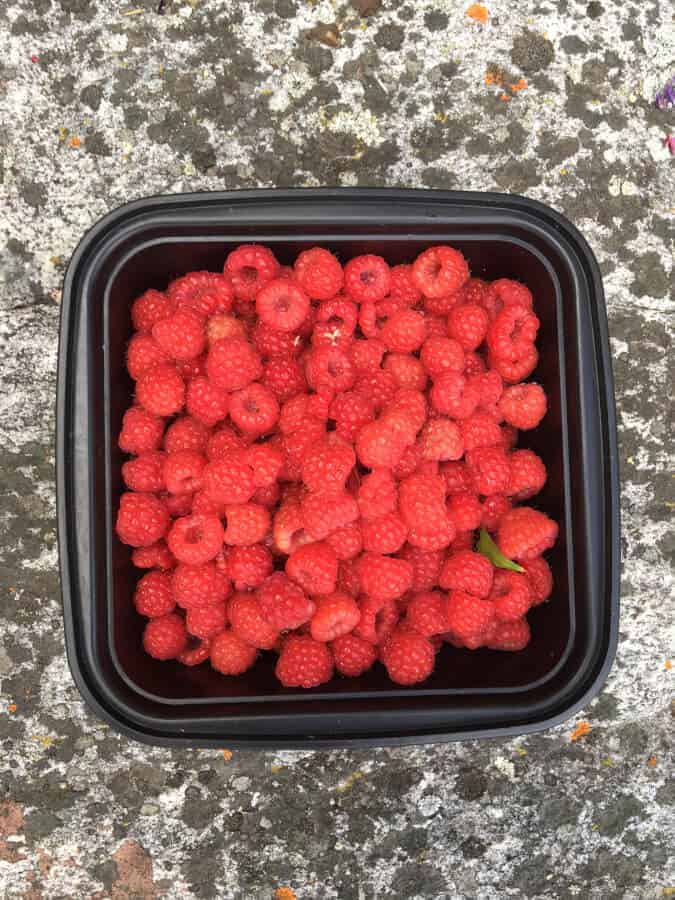 Raspberries from our ever-bearing raspberry bushes.

All in all, we're pretty happy with how our home held up during our time away.

Tales of an Off Grid Mama »

Hi, I'm Sarita! My family and I started living off the grid nine years ago. And if I did it, you can too!