Moving off the grid after a lifetime living with city conveniences and suburban comforts has been a wonderful experience. I absolutely love it. However, I had no idea just how much of a lifestyle change it would be, how much I would change, and how much my vocabulary would change as well.

In addition to having regular conversations about solar panels, off grid water systems, generators and batteries, there are other sentences coming out of my mouth that are just plain strange.

Here are six things I honestly don’t believe I ever said before moving off the grid.

This was my response to a phone call from two of our sons, who wanted to know if I was watching the Broncos and Cowboys football game on a Sunday afternoon. The boys were attending the University of Toronto, a mere 4,964 kilometers (that's 3084) miles away.

As soon as the words were out of my mouth, I started laughing. Dead silence from the other end. Then, “Huh?”  So this is what I told them.

Televisions use a lot of power. Something I never even thought about before living off the grid. In fact, when the television is on in the winter, someone (let’s just call him Dan) has to trek out to the shed and start up one of our two generators after about ninety minutes of TV time.

Our main source of power is solar. We have eight panels on our roof, currently limited to 640 watts. But because we live in Canada’s far north, we have very short days in the winter and limited sunlight. And when it’s cloudy out, we get less power from the sun.

To avoid wear and tear on the generator, we limit our TV watching…..but in this case, we turned the generator on and watched what turned into a FANTASTIC game for everyone but the Cowboys.

So not only do we live off the grid in an extremely cold climate, we live in a somewhat remote location. Though we’re only about a 34 kilometer (21 miles) drive from Yellowknife, NWT it’s a bit of a mission to get here.

First, there’s a curvy bumpy-scary-narrow two-lane paved highway. Admittedly, the driving conditions are (almost) completely redeemed by the beautiful scenery – lakes, rocks, and trees. Sometimes a bear or wolf too.

Secondly, there ’s our private pot-holed-rutted-bedrock-strewn, five-kilometer long horse cart track. While there are approximately fifteen homes along this stretch, most of them are summer/weekend cabins, and just a handful of us live out here permanently.

This road is a ONE lane trail, which apparently had a major overhaul several years ago. In this area,  an overhaul means "add lots more gravel".

“But is it a road?” my sons asked us during a weekly Skype session.

“It’s a well-honed track,” my husband said, enthusiastically. (He’s an enthusiastic sort of fella, my Dan is.)

Silence.  Then, “Like a Nascar track?”  one son asked, optimistically.

Dan and I looked at each other.

“More like a goat track,” I replied. (Update: at the time I first wrote this, four years ago, it was a pretty rough road. It has since been improved - thank goodness.)

As mentioned, the turn-off for our lane is about five kilometers along the goat track, though Dan is trying to convince me it’s only three. And don’t worry. As long as you have an all-wheel-drive vehicle and get a good run at it (and you have no emotional attachment to your windshield, suspension, or bumper) you’ll make it.

I know I’ve changed in many ways since leaving my comfortable suburban life and moving off the grid. I didn’t realize how much until I said this sentence to my husband over breakfast one day.

Wow, that’s a really nice headlamp.” We were enjoying a few quiet moments on our screened-in wrap-around veranda. (Note, I was drinking tea, not coffee, more on that later.)

I was thumbing through a women’s fashion magazine and saw an ad for a jeweler that showed a man examining a large diamond. But the diamond didn't immediately catch my eye – his nifty headlamp did.

When it’s dark out here, it’s  REALLY DARK. Fortunately, we often have moonlight, starlight, and the Northern Lights in the winter months.  When you have to go out to the generator shed in the dark (often at – 25 Celsius or colder) a good headlamp is a gal’s best friend.

Luckily, Santa heard me – I got a shiny new red headlamp with variable beam intensities in my stocking at Christmas. And I actually LOVE it…..

4. What do you mean, I can’t run the coffeemaker?

This is a tough one. After years of enjoying a slice of toast and a cup of freshly brewed coffee for breakfast, I wasn’t happy when my Tassimo machine appeared to be on the fritz last summer.

I’d plug it in, fill the water chamber, pop in a pod, slide my mug under the spout…..and wait. Sometimes the light would flash, other times it couldn’t even do that. I got grumpy.

After two days of drinking instant coffee, I got grumpier. So Dan bought me another Tassimo machine, sweetheart that he is.

That one didn’t work either. So then Dan clued in. It wasn’t the machines themselves.  It's the fact that they take so much energy they require something called “pure sine wave energy” – and our solar-powered off grid electricity just doesn’t generate that. (We are researching new systems as I write this. Hopefully, we’ll have a whole new set-up in a few months.) I’m now banned from using the coffee maker for fear it will kill our solar power system.

So until then, I make coffee the old-fashioned way in my off grid homestead kitchen. Yes, that means I use boiling water, kettle, filter, and measuring spoons. And if you’re looking for a Tassimo machine, email me. We have two.

5. Could you bring in some meat from the back porch?

When we lived in Southern Ontario, we had two freezers (note: we had teenage football-playing sons at home then) that were usually full of meat, frozen vegetables, and frozen home-baked goods. But guess what I learned after moving off the grid?

Freezers take A LOT of power. So when we were moving to our off grid home we left ours in Ontario. Now we take advantage of the sub-zero outdoor temperatures here.

For about six months of the year (from the end of October through to the end of April) we can safely store our frozen foods on our screened-in veranda. It’s THAT cold for THAT long. But then, of course, it's a race to finish our frozen food before the temperature rises.

So when we want a caribou roast or moose meat for stew, Dan simply brings it in to thaw in the sink.

And finally….though it has more to do with living in the Northwest Territories than it does to do with moving off the grid, something I NEVER thought I’d say:

Last year, the number of people pulling their pickups into the many lakeside parks for outdoor barbecues once the temperature rose to -20 C just amazed me. Yup. Up here in the North, this is spring weather.

Now that we’re getting acclimatized, we know that when the temperature rises to  -20 C or better, the outdoors becomes a MUCH nicer place, and our screened-in wraparound deck becomes our outdoor haven once again, barbecue included.

And there you have it. Moving off the grid has changed more than our lifestyle - it's changed our vocabulary too. 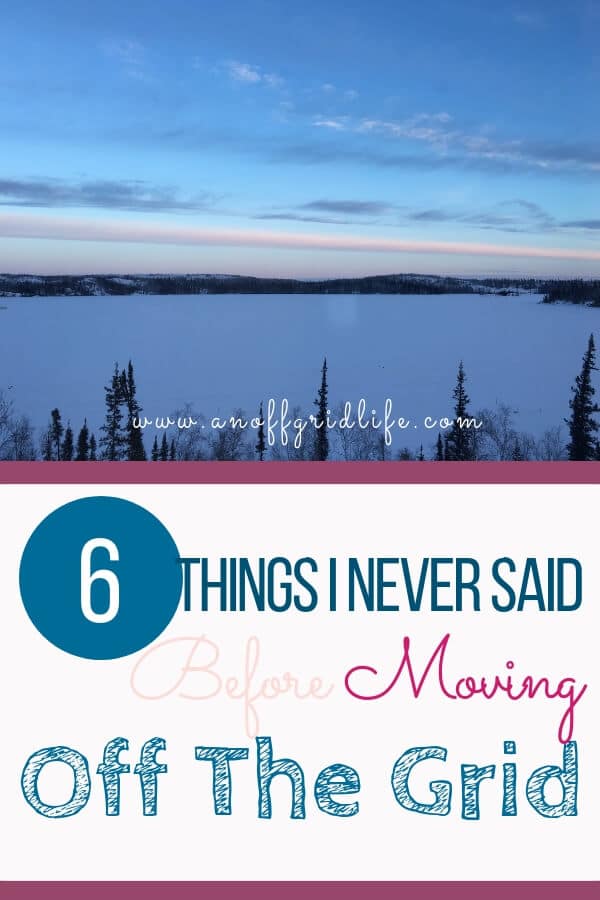 Sarita is the owner and founder of An Off Grid Life. She lives with her family in an off the grid cabin outside of Yellowknife in Canada's Northwest Territories. Her days are full homeschooling, writing, and learning how to be more self sufficient.