As you probably know by now, our family lives off the grid in Canada's far north. Like many other families with off grid homes, we depend on off grid electricity from solar panels and generators to power our house. Recently, we “upgraded” our off grid battery bank.  I thought we should give an explanation of what we did plus an overview of the process.

We upgraded our off the grid battery bank for more storage.

Our Original Battery Bank for Off Grid Solar System

We originally had a battery bank consisting of 12 Surrette 530 6-volt three (3) cell deep cycle batteries. These batteries are specifically designed for Solar Panel Photovoltaic, inverter, Renewable Energy and Alternative (Alternate Energy) applications. (For a basic overview of what to know about the role of batteries in powering an off grid home, read our post on Batteries for Living Off The Grid.)

When we first purchased our off grid cabin, the original configuration was set up with a Xantrex DR Series 2412, 12-volt inverter. The batteries were linked in a series of two batteries at six volts each and six groupings running parallel.

A few years back, we upgraded our inverter to a Schneider Xantrex 4024. This means it can handle 4000 watts and is a 24-volt system.

Changing the Configuration of our Off Grid Battery Bank

When we upgraded our inverter, we also changed the configuration of the batteries. It could then run four batteries at 6 volts in a series, and link three such groupings in a parallel manner.

When it comes to battery banks for off grid living, you'll see terminals with more than one cable connected to it. In fact, it's necessary to successfully construct these kinds of battery banks. Ultimately you could almost connect together as many batteries as you want.  Yet it can get quite confusing and a seemingly tangled mass of wires.

Always remember to be safe, and keep track of your connections. A good rule of thumb is to make a diagram of your battery banks before attempting to connect them together.

We've recently been gifted with three batteries of 8 volts.  They have a capacity of 605 Amp Hours at the 20-hour rate.  By combining the three “new” batteries, it would give us an additional group of 24 volts with a 605 AH capacity. 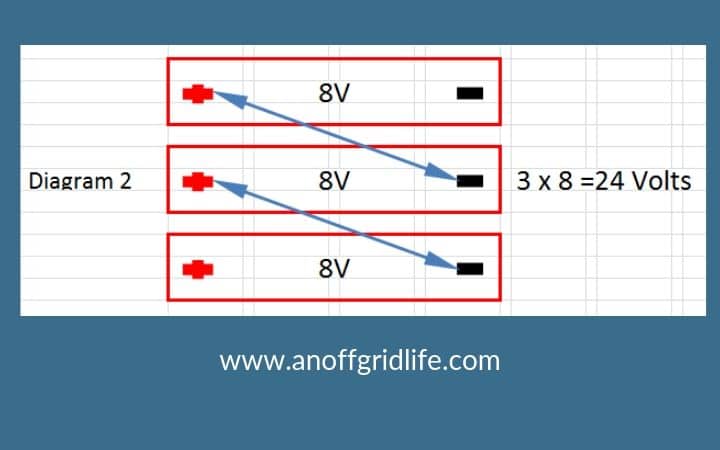 Now, according to everything we've read, it's suggested that you don't mix and match battery types and age. This is due to long term potential issues, as well as batteries in series performing at the lowest common denominator.

This means that if we add the 605 amp-hour capacity to the previous 400 amp-hour groupings, it would only give us an additional 400 amp hours instead of the 605 it's capable of providing.  We decided to add this grouping anyways. The "new-to-us" batteries are also Surrette batteries.  They're also around the same age as our current batteries - about 8 years old.

We Added 33% More Energy Storage to Our Battery Bank

We also like the fact that the additional 400 amp hours will move us from our current 1200 amp hours to 1600 amp-hours. This effectively gives us 33% additional storage of battery bank for our off grid home.

The additional storage should serve us well this coming winter. As we are north of the 60th degrees latitude line, we live with dramatically reduced daylight hours. And that means far less solar power coming in during the day. 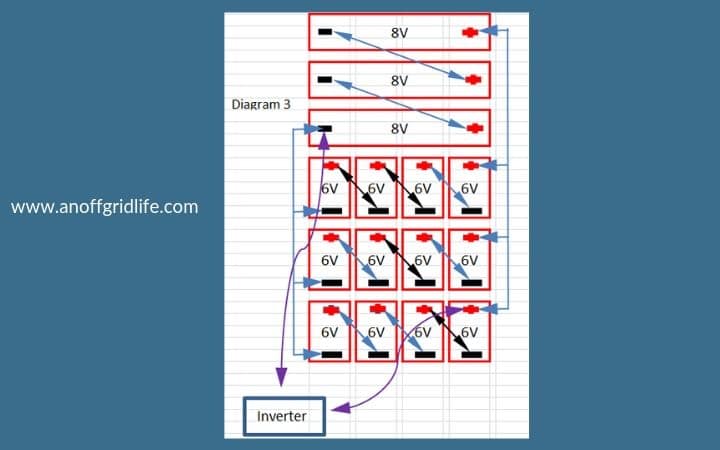 So Far, So Good

So far, it seems to work as we expected. However, it's hard to say if this battery bank setup for our off the grid solar system will continue to work well over the long term.

We also decided that this was a safe enough approach right since our goal is to update the system next year. We're looking at going to a 48-volt system with all new batteries. Then this battery bank system will get transferred to our garage/workshop.

Just Because You Can Doesn't Mean You Should

It's also important to point out that you can connect positive and negative to one end of your battery bank.  Yet that is not the recommended optimal setup.

The generally preferred method for keeping the batteries equalized involves connecting to the positive at one end of the battery pack. And the negative at the other end of the pack. This gives a better flow and more balanced wear and tear on your bank.

Why Upgrade to a 24-Volt or 48-Volt Battery Bank System?

The higher the current (measured in Ampere or Amps) the bigger the components need to be. High currents need large diameter cables and fuses. And both of them are expensive. By doubling the voltage you get double the power (Watts) at the same current.

The following shows the different wattage you can draw using the same amps yet increasing the voltage of your system.

As I said, we went from 12 volts to 24 volts. Our next planned upgrade will be moving to 48 volts.

As you can see, we'll be able to run four times the wattage without increasing the amp.  And that means less stress and heat generated through the electrical system.  Conceptually this means we could actually use cables of a smaller diameter.

AMP Hour is a unit of measure for a battery's electrical storage capacity. The standard rating is an amp rating taken for 20 Hours.

Batteries Parallel is connecting two or more batteries (or battery strings) in a manner that results in a multiplication of capacity of a single battery while maintaining the voltage. The capacity is the amp-hours, so connecting 2 batteries of 12 volts @ 400 amp-hours in parallel maintain the 12 volts yet gives you 800 amp hours capacity.

Batteries Series is when you connect two or more batteries (or battery strings) in a manner that results in a multiplication of voltage while keeping the same capacity. Therefore, connecting 2 batteries of 12 volts @ 400 amp-hours in series maintain the 400 amp hour’s capacity yet increases the voltage to 24 volts.

Capacity is the maximum amount of charge that can be stored in your off grid battery bank.

Legal Disclaimer: My comments on this post are based on research, practical personal experiences and various life lessons. None of what I am stating suggests you should not involve a competent electrician!!!  It is only to provide information that we have learned that might help you better understand your own system.