Just like other livestock, rabbits come in a wide range of breeds. So how do you know which rabbit breeds for meat will be best to raise on your homestead?

You want a breed that will have a high feed-to-meat ratio, as well as a high dressed weight. Other factors that will decide which breed to choose include their fur type, the rate at which they gain weight, and the age at which they’re ready to butcher. Fortunately, quite a few breeds of rabbits have ideal characteristics for homestead meat production. Depending on your specific meat needs, one of these five rabbit breeds below will suit your homestead.

The most common and popular rabbit breed in the world, New Zealand Whites actually originated in the United States. They’re classified as a medium-weight meat rabbit, reaching a mature weight of 9 - 12 pounds. The does have a gestation period of 28 - 35 days, similar to other breeds. New Zealand Whites put on weight relatively quickly. They should weigh around five pounds by the time they reach ten weeks old.

This breed is ideal for homesteaders who get attached to livestock and have trouble butchering them sometimes. New Zealand Whites have red-colored eyes and a pure white coat, giving them an albino look. This characteristic seems to help people think of them less as a pet and more as livestock.  As any homesteader with kids will tell you, butchering your homestead livestock can be the most difficult part of the process, and any attachment makes it worse.

Additionally, their fur can be sold as a way to make money off the grid. The white fur allows you to dye the fur to whatever color you wish, and make a variety of clothing and accessories.

A mixed breed, Californian rabbits were originally created by crossing a New Zealand breed with a Chinchilla breed (not an actual Chinchilla). They have white fur with black spots on the nose, ears, and feet. Californians will reach a mature weight of 8 - 11 pounds, slightly smaller than New Zealand’s.

This mixed breed was developed in the early 1900s and was specifically chosen for the high-quality meat and desirable fur coat. As a result, these rabbits provide useful fur for homestead projects and crafts as well as low-fat, high-protein meat. They also have gentle dispositions and tend to have less aggressive Does than their New Zealand counterparts.

Literally translating to “Silver (rabbit) of Champagne”, this French breed has been used for meat production since the early 1600s. As you’ve probably guessed, these rabbits have a beautiful silver-colored fur that has been prized by people for centuries.

As if rabbit breeds weren’t confusing enough, there are several different color subbreeds of the Champagne D’Argent. These include the Blue, Brun, Noir, Champagne, and Creme. For the purposes of meat production, the original Champagne should be used.

Commonly considered the largest rabbit breed in the world, Flemish Giants have been around for centuries. In fact, many common breeds in the world today were developed by mixing Flemish Giants with others. Their mature weight can range from 13 - 20 pounds or more, making them significantly larger than most breeds.

Despite the high weight, this doesn’t necessarily mean they will be one of the best rabbit breeds for meat. They have large bones as well and require a lot more feed than smaller breeds. Keep this in mind when deciding what breed will be the most economical for your homestead.

If you have the ability to feed your rabbits without purchasing commercial feed, this will make raising Flemish Giants more economical. After all, raising your own homestead meats should be one of the ways to save money off the grid.

One of the more recent additions to the rabbit breed list, Florida White’s were first developed in the 1960s as a dual-purpose breed. They will reach a mature weight of four-to-six pounds, making it smaller than the other breeds mentioned in this list. They look similar to New Zealand Whites, with all-white fur and albino red eyes.

Despite their smaller size, Florida White’s have exceptional feed-to-meat ratios and almost 65 percent meat-to-bone ratio. This gives you more meat and less waste during processing. For economical reasons, this makes the Florida White one of the best rabbit breeds for meat.

Florida White’s have a very docile personality and would be a great beginner rabbit for people new to raising rabbits, or for those trying to teach young children how to care for homestead animals.

Once you’ve chosen a breed, you need to buy a breeding pair to get started. Buying from a local farmer or homesteader will give you the opportunity to ask them questions about that breed and any specific requirements depending on your climate. If you can’t find any local rabbits, check out this resource listing Rabbit Breeders around the United States.

Before your rabbits arrive, you need to build a hutch and get all your supplies ready. To learn everything you need to know about how to raise rabbits for meat, check out our series here.

Part I: How to Raise Rabbits For Meat

Part III: Raising Rabbits for Meat: Tips on How to Build a Rabbit Hutch 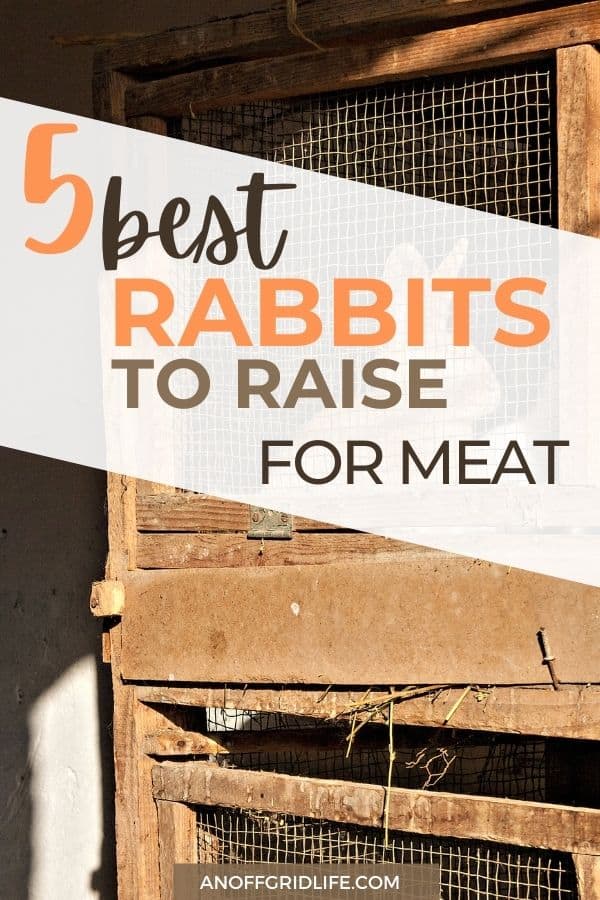 This post is part of the Homestead Blog Hop 317